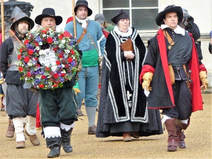 Following the end of the Second Civil War in 1648, the more fanatical elements in the Parliamentary party wished to bring the King to ‘Justice’.
Unable to achieve this through Parliament, who still wished for a negotiated peace, the Army took matters into their own hands and on 6 December 1648 Colonel Pride’s Regiment stood at the doors to the House and would only allow in their own supporters.
Forty five leading Parliamentarians including Sir William Waller were imprisoned, 146 excluded and 75 allowed in.
Now with a majority they proceeded to bring the King to a ‘High Court of Justice’.
Due to its illegality the judges and law officials would have nothing to do with it.
So the Rump Parliament appointed 135 Commissioners to the High Court of Justice, but only 68 would eventually sit in judgement.

The King had no legal representative and was entirely on his own in the court set up in Westminster Hall.
He conquered his stammer and gave an eloquent defence to what we would call today a ‘kangaroo court’.
Despite public interruptions on the King’s behalf, including one by Fairfax’s wife, and even his guards saying “God bless your Majestie”, the outcome was a foregone conclusion, and the King was to be put to death.

He was lodged in St James’s Palace whilst a scaffold was erected at the Banqueting House.
During this period he was able to say goodbye to his children Princess Elizabeth and Henry Duke of Gloucester who had been held in captivity by Parliament.
However, on the day of his death (30 January 1649 (new style)) there was a long delay as it was realised that an Act had to be rushed through the purged Parliament, making it illegal to proclaim a new king, otherwise his son would have become King by right of succession.

Access to the scaffold was made through a window in the brick building adjoining the Banqueting House at that time.
Its position is now marked by a bust of King Charles in the stone extension to the original Banqueting House added after the fire which destroyed the rest of the old Tudor Palace of Westminster.
Famously wearing two shirts on the cold day so that he would not shiver and appear frightened, the King was put to death at 2.00 pm.  The King’s Army official policy is never to refer to it as an execution as this infers a legal act, which this was not.

‘The Charles I Commemoration Parade’ - Today

Nowadays, on the last Sunday in every January, The King’s Army of the English Civil War Society assembles in full funeral dress on the Mall by St James’s Palace.
His Majestie’s Horse troop his Colour which the Army salutes.
Then with great solemnity and with the soldiers carrying their arms in funeral order, a wreath, which ‘Remembers’ His Majestie’s horrid murder, is escorted along the Mall onto Horse Guards where the whole Army is formed up.
A religious drumhead service is held, a Colour is trooped and blessed, the Oath of Loyalty is administered and commissions and awards are presented.

At this point the wreath is trooped around the whole army before being taken by the honour guard through Horse Guards Arch and across to the Banqueting House and laid where the Horrid and Bloodie deed was carried out.
Whilst this takes place the Army remove their funeral dress and resume a martial order before retracing their route back to St James’s with drums beating and Colours flying.
Here, with great shouts and acclamations to their King, they brave the rebels to come out of the city and fight them in the year ahead.

The King’s Army follow the exact route His Majestie took on that morning through St James's Park and across what is now Horse Guards, where he would have entered a gallery of Whitehall Palace now long gone that bridged over the tilt yard in Whitehall and entered the Banqueting House.
It is a great honour and privilege for us to be allowed to use this area to commemorate His Majestie’s martyrdom.
A black mark on the clock above Horse Guards at 2.00 pm remembers the time of the King’s death.

As a part of the commemoration a wreath is laid also by the Council of Warre of the King’s Army at the equestrian statute of Charles I at the top end of Whitehall in Trafalgar Square.
This bronze statue was made by Hubert Le Sueur in 1633, but was hidden during the Commonwealth.
It was re-erected in 1675 on the site of the most elaborate Eleanor Cross erected by Edward I, which was demolished by order of Parliament in 1647.
​This point, Charing Cross, marks the centre of London and road distances are taken from here. 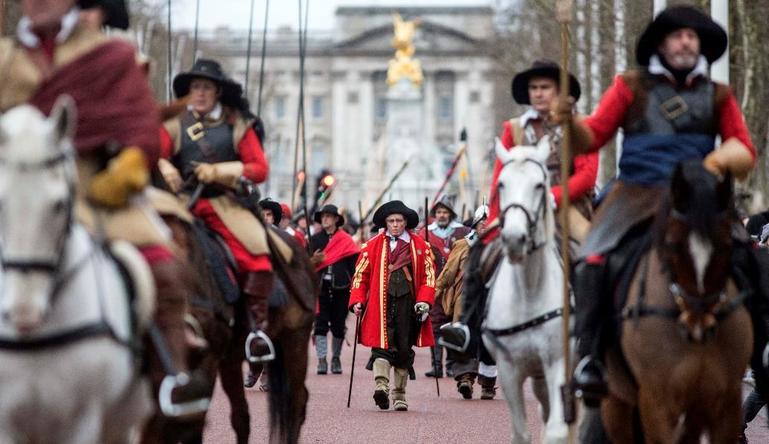